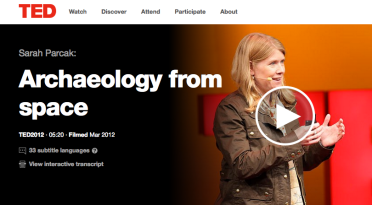 Looking for a cool job for your protagonist — something that stands out among all the detectives, spies, magazine editors and (if you’re a fan of cozy retro mysteries) curates?

Try this on for size:

Dr. Sarah H. Parcak, described by the New York Times as a pioneering “satellite archaeologist,” just won a million-dollar prize from TED for a project of her choice.

Satellites can now be used to armies of looters, which is fascinating enough, you’d think. But this story also covers terrorism, ancient artifacts and ebay.

Read the article, then watch her TED video.

Don’t everybody go to your laptops at once…